Doctors Of All Departments 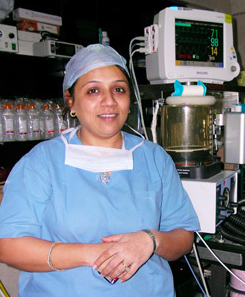 I simply couldn’t resist expressing my inexplicable gratitude to your generous self but at the same time, I find myself at a total loss of words to do so. Still, in the broader sense of spiritual emotions, accompanied with my prayers to ALLAH for both you and Mrs. Chhaya Bhagat, who was equally affectionate and considerate towards me in giving instructions on the operation table, I write this as a token of appreciation.
Consult fee 500

Dr. Chhaya Hemal Bhagat, an anesthesiologist, has wide experience and knowledge and has been a resident as well as a lecturer in Anesthesia at the B.Y.L. Nair Hospital.

»Comparative of L.M.A & C.O.P.A under general anesthesia in spontaneously breathing patients at the 47th Annual conference of Indian society of Anesthesiologists held at Cochin, from 26th - 30th December 1999.